This past week the VEP team got to participate in the Department of Education’s (ED) Negotiated Rulemaking session. You may have seen it referred to as NegReg as well. As we’ve mentioned before, we were selected as the lead advocate for Veterans in the 2019 NegReg. This 2019 session focuses on accreditation and innovation. We’re honored that VEP was chosen for this role. We also know that many people don’t know what Negotiated Rulemaking is. In fact, most may have never heard of The Negotiated Rulemaking Act of 1990. So buckle up while we give you the run down.

What is Negotiated Rulemaking?

Negotiated rulemaking is a consensus-based process where an agency develops a proposed rule by using a neutral facilitator. You can expect there to be a balanced negotiating committee. The rulemaking committee is composed of representatives of all interests. Specifically, those groups that the newly proposed regulations will affect, including the rulemaking agency as well. This gives everyone with a seat at the table a chance to reach agreement on a rule before a final version is proposed. In this particular session, representatives from institutions of every sector in higher education were invited. This includes accreditors, student representatives, financial aid administrators, employers, state authorizing agencies, and Veterans. These groups represent most of the stakeholders that would be impacted by the possible changes in regulations of innovation and accreditation. That’s a brief explanation of negotiated rulemaking from our perspective. 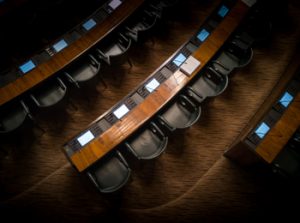 Having sat in on this process for many days, we know the NegReg process can be a legislative nightmare. For example, a significant amount of time was spent discussing the procedures of the sessions, including seating arrangements. However, there were also many inspiring moments. Particularly inspiring was when Daniel spoke about how important it is to fix the problem of Veterans not receiving enough credit for Military training and experience. Legislative procedures and meetings aren’t the most exciting thing to watch but we encourage Veterans who are currently in school, or interested in using their educational benefits, to get involved. Those interested can spend some time watching the discussions at recent negotiated rulemaking sessions.

Day 1 of NegReg:
Snowed out

Support for The Reserve Component Employer Incentive, Compensation, and Relief Act of 2018

Representing Veterans at Forum on Reforms within Higher Education